Mosque Monday is a month-long series through Ramadan where I am sharing some of the beautiful mosques that I have visited.

It’s hard to believe that I am at my fourth and final week of this fun project. Each week it has been so challenging to choose just one mosque to feature, and when I set out into this, I decided that I would pick from a different country each week. Many of the amazing places that I have visited have also presented a huge struggle to choose which one of the gorgeous mosques from that country to share. This week, I am faced with the biggest challenge yet, as I have to choose just one from the several stunning mosques that I visited in Egypt.

My trips to each of these amazing countries deserve (and hopefully will get) many more posts devoted to all that I can share, but none more so than our wonderful trip to Egypt, with so much of that credit going to the most wonderful, knowledgeable, kind, beautiful and all around amazing guide – Marwa of Egypt Trip Guides (read some amazing, ALL FIVE STAR reviews of Marwa’s travel company on Trip Advisor). Marwa and I became fast friends, and though years are passing by faster than I’d like, we keep in touch and I know that I will see Marwa in person again when timing works out.

Marwa took me to several mosques in the historic quarter of Cairo and each of them were rife with details and beauty that begs to be shared, but because I HAD to choose, I am sharing tonight the gorgeous Mosque-Madrassa of Sultan Hassan.

Per its name, the mosque was commissioned by Sultan an-Nasir Hasan, and was built between 1356 and 1363. Interesting in context of the pandemic raging across the globe right now, the mosque was built on the heels of one of Cairo’s most devastating times as the Black Death plague ravaged the country in the mid-14th century. Despite medieval Cairo being quite ahead of its time with a fully functioning hospital in place – the Mansuri Hospital  which was completed in 1248 and hailed as one of the largest hospitals ever built –  hundreds of thousands of Egyptians perished in Cairo during he plague, and the economy suffered greatly (our own economic woes right now pale in comparison to the economic devastation that the survivors faced).

But, by 1356, Cairo was bustling (though with a depleted work-force) and work on the mosque began.

The mosque sits next to the Citadel of Cairo, which was constructed nearly 200 years prior to the Mosque-Madrassa of Sultan Hassan. It impressively spans over almost 8000 square meters, and was famed to be situated perfectly for the Sultan to view from his palace in the Citadel. The mosque complex housed both a school and a small hospital and served as a place to nourish the body, the mind and the spirit.

When I entered the mosque with my wonderful guide Marwa, we were greeted by a muezzin who demonstrated the acoustics of the mosque by singing into the wall – which then reverberated throughout the room. As his voice echoed across the stone walls around us, it had an almost transformative effect and I felt almost as if I was stepping back in time as we continued on through the halls of the mosque to the grand courtyard to the center of the mosque. 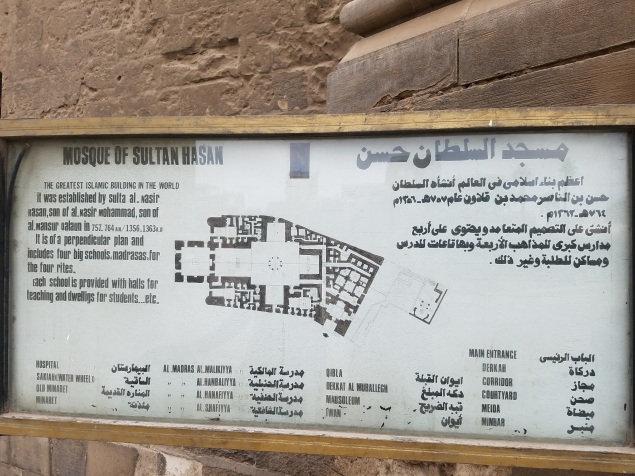 The courtyard is stunning and grand, with a large fountain in the center and surrounded by four monumental iwans, which are large vaulted chambers. The marble floor is inlaid with stunning designs. 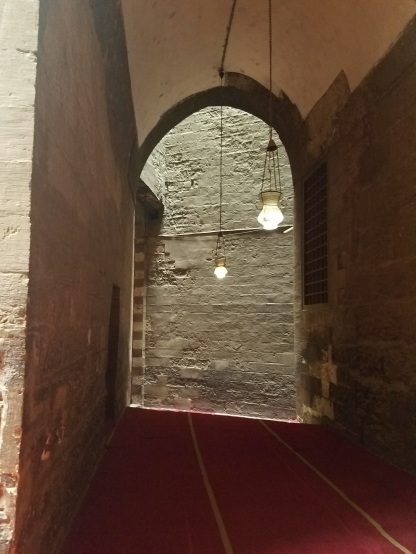 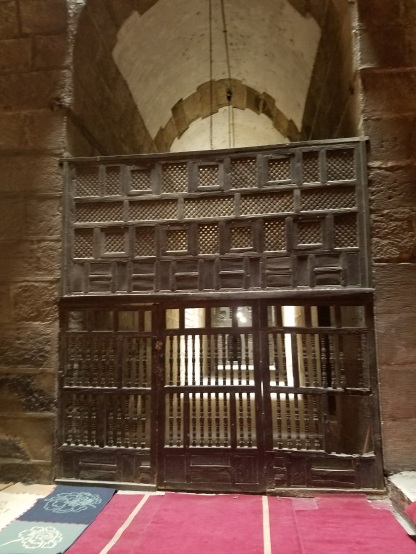 Lamps hang from long strings of chain in each of these chambers, the length of which stands as a reminder of their vast size. 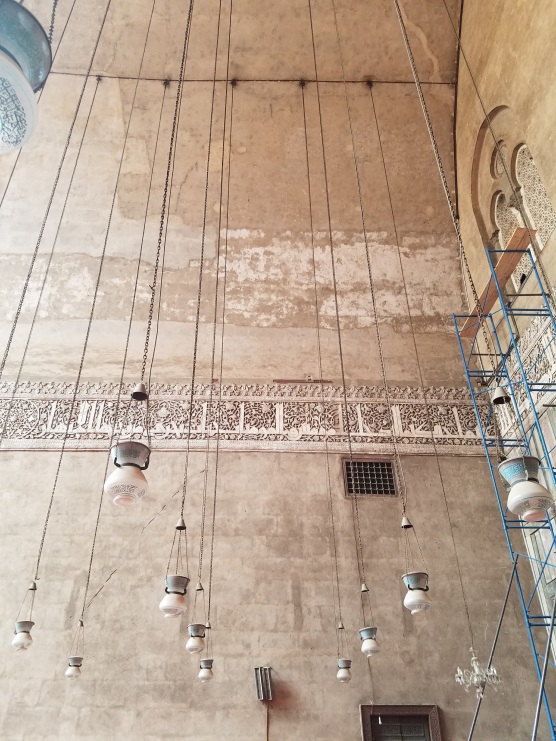 The largest and most ornate of these chambers is the mihrab, which indicates the “qibla” – the direction of Mecca. This main qibla iwan was world renowned in its time for both its size and its beauty.

The carvings along the qibla are stunning, and also share a secret. Generally architects were not able to claim their artistry as the fame of these great mosques would go to the Sultan that commissioned them. The chief architectural designed of the Mosque-Madrassa of Sultan Hassan, Muhammad ibn Bailick al-Muhseini, carved his own name hidden among the stunning carvings (see the corner, running up the side, where the vine design breaks way for Arabic lettering).

Sitting just behind the main qibla iwan is the mausoleum. It is accessed from through a doorway to the left of the mihrab. The walls of the mausoleum are inlaid with gold and silver, with ornate Arabic designs.

And with this, I wrap up my Mosque Monday series! Writing about these gorgeous sites has been a true pleasure for me as I have had the opportunity to relive these experiences that seemed so fleeting. Sadly I don’t know when I will be able to travel again given the uncertainty of the public health situation around the globe, but until I am able to get to these stunning places again, I will enjoy reveling in the travels of days past.

Don’t forget to check Instagram for the latest pics from our Adventures!